James B. Longacre, the long-suffering Chief Engraver at the mint in Philadelphia, had diligently weathered the growing pains of the transition to a modern coinage, whose “French Bronze” alloy, that he inaugurated in 1864, remained the standard for US cents through 1982.

Later in the year, a small letter “L” appeared on the new 1864 bronze cents, on the ribbon of the headdress. I honestly don’t know if this was Longacre’s idea or someone else’s. Probably not an Act of Congress, but well deserved in any case. The transition from large to small cents, radical change in alloys, and the adjustment of the equipment and procedures was likely no small project.

Longacre passed away in 1869, well before the key date of the series was struck in 1877.  Key dates are usually lower mintage dates, and the 1877 was made in fewer numbers than any of the Indian Cents except for the 1909-S in the final year of production. And, there is a strong connection to the low number of 1877’s produced (852,500 pieces) to Longacre’s transition to the bronze cent in 1864.

Once again, the legal tender of one cent coins surfaced – this time because the bronze cents were intrinsically worth so much less than their face value. Remembering that people in the early to mid-19th century took it as a matter of course that their coins contained metal nearly equivalent to their face value, they were surprised when the Mint Act of 1864 let them know otherwise by limiting the maximum use of bronze cents to 10 pieces per transaction! The Mint Act of 1871 was an effort to mitigate this situation by allowing unlimited redemption of these coins by the banks, along with other coins not in favor with the public.

So, the pennies began to back up at the banks in a big way.  Sacks and sacks of them, along with the many old large cents, the unpopular 2 cent bronze and 3 cent nickel coins that were brought out in 1864 and 1865, respectively. The banks were required to redeem all of these in unlimited quantities.

By 1877 these redemptions were beginning to wane somewhat – but there was also an economic slowdown in place that, with the public redemptions now being mostly of the bronze cents drastically reduced the need for new one cent coins. Production of new 1877 cents was cut off early in the year. , due to Long

In 1886 Charles E. Barber, who we’ll meet in later postings on this site, decided to make some adjustments to the master die hub. From the time of the first bronze cents of 1864 there was a noticeable doubling of some of the dates and lettering – apparently Mr. Longacre at times had a heavier hand in punching these details into the dies which caused a slight bounce in the punch and a doubling of the feature being punched…

In remaking the master hub, Barber moved the last feather of the Indian headdress slightly lower. This feather on hubs since 1864 had pointed between the I and C in AMERICA (Variety 1.) On Barber’s adjusted hub the feather points between the C and the A (Variety 2.)  The second variety is somewhat rarer. For the proof coins of that year the high-grade coins of Variety 2 are quite scarce.

Photos are provided for each of the coins discussed, courtesy of PCGS. 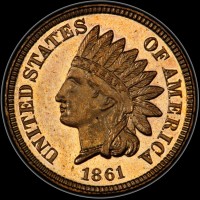