The first step in valuing a coin is to accurately identify it. What country made it? When and where was

coin be graded by a collector? Is there a story behind this coin? Is this coin in demand by collectors?

Most modern coins are easy to identify, but what if you have some that aren’t?

If you’re having trouble identifying a coin, try a Google Image search. If you haven’t done one of these, you’re in for a treat. Just look for, and click on, the word “Image” on the Google home page (look in the upper right corner of the screen.)

Type into the search bar what you see on the coin, such as…

·         Exact wording and spelling of inscriptions

When you press “Enter,” your screen will be filled with pictures of coins that Google thinks you want to see. Each picture links to a website where the illustrated coin is being bought, sold, or discussed. The more you put into the search bar the closer Google’s response will be to what you have.

What makes one coin more valuable than another? What motivates a collector to want to own any coin? As a lifelong collector, four things come to mind:

Most coins are common. When governments plan to make coins for circulation, they generally want to make a lot of them. That said, sometimes it doesn’t work out that way. Sometimes slight changes are made during production. Or for one reason or another, coins that were made in normal quantities just don’t show up anymore (like some of the common US Silver Dollars that were melted in large quantities after WWI.) Generally, a coin that is scarce or rare is going to be worth more than a common one.

Coins begin to wear as soon as they are placed into circulation. The amount of wear is the most significant determinant of the value of a circulated coin. Even an uncirculated coin will be valued differently than an identical uncirculated coin with, for example, more contact marks picked up during the manufacturing process at the mint.

What a coin is made of matters. A well-worn common gold coin will usually be worth more than a well-preserved coin made of a lesser-valued metal.

Some coins have value based on the history surrounding their creation. An excellent example of this is any coin from the US Mint at Carson City, Nevada, a Wild West story of silver and gold mining bonanzas and management shenanigans that always commands an enthusiastic audience.

Ok, ok – but, now that we have all of that, where can I find what this coin is worth?

Frankly, during present conditions, the most accessible indication of value is eBay. The most effective use of eBay is to qualify your searches by using the “Sold Listings” checkbox, which will display only completed sales and the price received by the seller.

The best overall presentation of US coin values is A Guide Book of United States Coins 2021. Known as “the Red Book,” this comprehensive annual listing provides the estimated retail value of each US coin in a range of conditions, offering a solid grounding in the relative value of one coin over another.

We plan to continue posting information about coins and collecting. We also look forward to your comments and questions!

Traits of a Coin Collector

What type of coin collector are you? There are a number of collectors in the coin collection world and most interestingly, there are certain common traits. There have been studies showing that collector groups scored significantly higher in academic achievement than did the noncollector group. According to a study, Coin collectors are considered meticulous, perfectionists, extremely orderly, passionate and quite patient.  Their...... 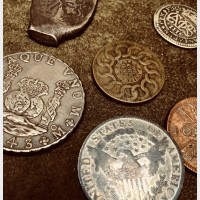 A Brief Introduction to Coin Collecting